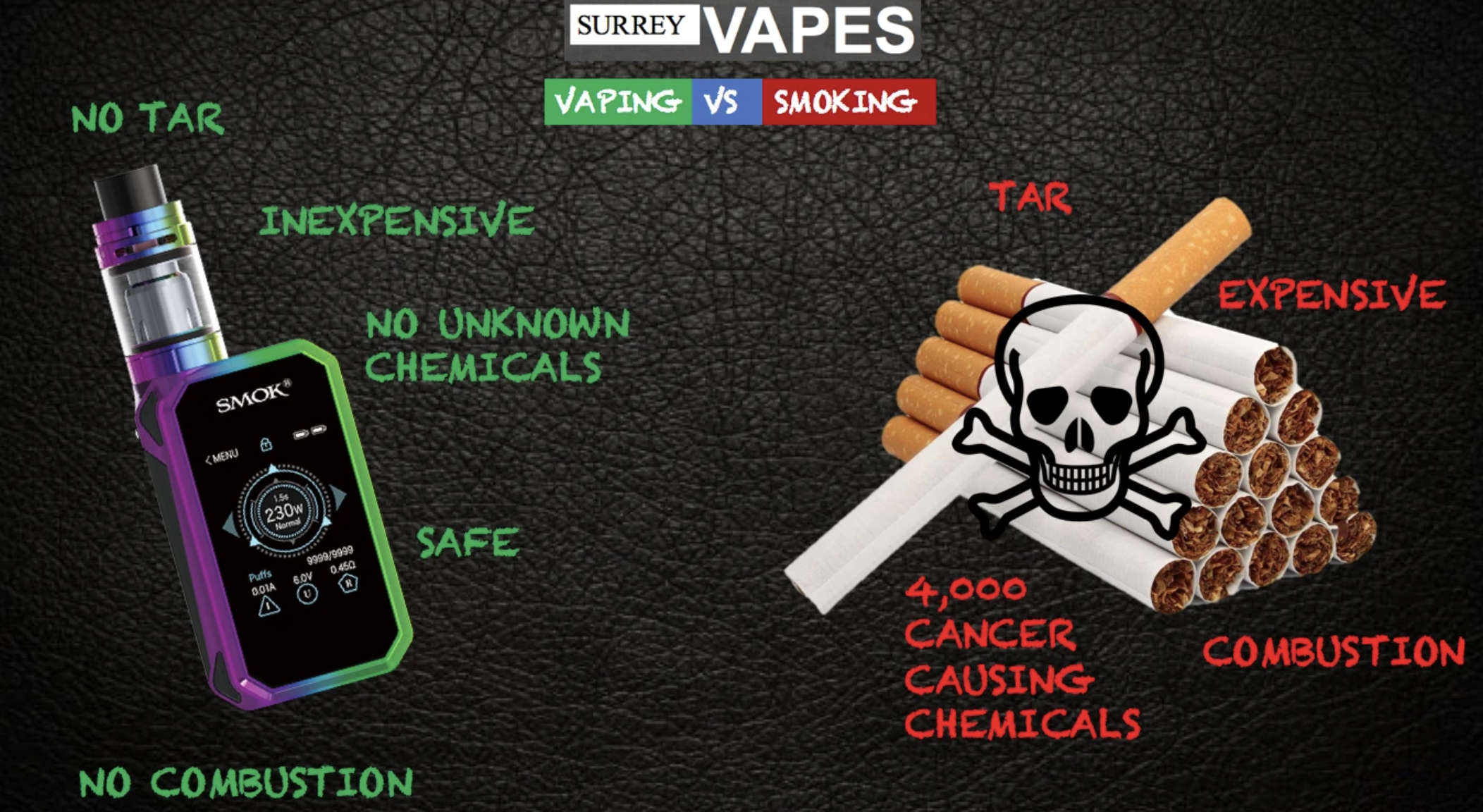 Since the dawn of time, man has always had this fixation with smoking tobacco. Today we understand how dangerous it is to our health but yet we still do it. There are also a list of additives and chemicals that are found in most modern tobacco products.

Once upon a time, an American man by the name of Herbert Gilbert invented the first ever smokeless non-tobacco cigarette. The idea was to replace burning paper and tobacco with flavored steam, or vapor, that contains nicotine. It wasn’t until 2003 that this product actually hit the market thanks to a man by the name of Hon Lik  from China who was able to successfully market the product. The jury is still out as to whether or not vaping is safe or healthy, however most people would agree that it is a much healthier and safer alternative.

One main factor would be tar. There is none present in vapor whereas smoking anything will produce a thick and toxic byproduct. If you blow cigarette smoke out on a napkin it will turn yellow instantly however with vapor it will remain white. This gives us an idea as to what it may be doing to the inside of our lungs.

Some smokers say they can’t afford vape gears to help them quit but let’s do the math. A pack of cigarettes costs almost $15 so that means you could buy a complete setup for $105, the price of smoking a pack a day for a week. The price of juice varies greatly but $20 would buy you a bottle of 30ml juice that could last anywhere from a day to a couple of weeks, of course depending on how often you vape and what kind of juice you are buying.

There are only four main ingredients in every bottle of e-juice. The first one being glycerin, which is an organic compound found in vegetables.

The second ingredient is propylene glycol , a substance found in asthma inhalers. Next there is food grade flavoring which actually gives the juice its distinct taste

Last but not least is nicotine, which is actually not a carcinogen, although it can be highly addictive. For that reason, many juices are also available without any nicotine.

In cigarettes there are a number of lethal additives such as Hydrogen Cyanide, Carbon Monoxide and Formaldehyde, just to name a few . There has been a recent article showing the formation of  Formaldehyde in e-liquid at high temperatures. This study has been debunked many times and even disputed by the actual scientists that conducted the experiment. The major argument being that vapers would never need to reach those dangerous temperatures in order to enjoy their vaping experience. In other words, nobody would be able to endure the taste of the conditions set forth in the experiment. Interestingly enough, even when used properly, cigarettes still contain Formaldehyde, so keep that in mind while being lectured about toxic substances by tobacco smokers.

Cigarette smoke contains over 4,000 chemicals, including 43 known cancer-causing (carcinogenic) compounds and 400 other toxins. This includes nicotine, tar, and carbon monoxide, as well as formaldehyde, ammonia, hydrogen cyanide, arsenic, and DDT. Here is a more exhaustive yet incomplete list. Keep in mind the list goes even further.

Safety is also a major concern for most people who want to make the switch to vaping. It can be dangerous if not educated about the proper usage of batteries, especially when using sub ohm atomizers on mechanical and unregulated mods. Please note that sub ohm tanks should not be used with mechanical mods that have hybrid top caps. (I don’t know why, but I heard Rip Trippers  say this so it must be true) Forums are also a great way to ask questions about safety and learn through other people’s experiences.

Brands such as Aspire, Smok and Innokin make it one of their top priorities to produce the safest possible high-quality devices. Unless you are using extremely low resistance sub ohm builds with over 50 watts of power, battery safety will probably never really be a major concern. Like any lithium battery, proper care must be taken in order to ensure safe usage of the product, whether we are talking about vaping or any portable electronic devices such as laptops and cellphones. Nothing can be 100% safe but relatively speaking, vaping appears to be much safer than those deadly cigarettes. Not to mention the countless accidental fires that have been started by smoking vs vaping.